We are not interested in it’s typical propaganda accents but in the circumstances of the fire and its DATE. The article talks about the previous day (September 8th) approx. 7 pm as the time of the incident.

“Kattowitzer Zeitung” was published in Kattowitz (the editorial office, or the “Schriftleitung”, was at 12 Grundmannstraße), and the majority of its readers lived in Kattowitz. If the German version of events was fake, if it was falsely giving the date of the fire as later by 4-5 days, the readers would have IMMEDIATELY found the swindle out  – the more so that this version of events is very “noisy”: “crackling rifle-gunfire”, “rattling machine-guns” and “dull sounds like the detonation of hand grenades” – and all this in a city-centre! Atop of this “shrill sounds of horns” of the military and police vehicles speeding down Grundmannstraße, and finally the crowd that gathered on September 8 in the evening at the synagogue.

Most obviously every reader, especially those living in the center, would have been able to  determine immediately whether anything like this happened during the previous evening.

I decided that this publication should be presented here. The more so, of course, that it all  played out just next to our school, the former Stadtgymnasium, which later became the Polish male gymnasium (1922-39) and the present III Adam Mickiewicz High School.

Here then is the full text from the “Kattowitzer Zeitung”:

Assault by insurgents in Kattowitz

When yesterday around 7pm, after dusk, a military detachment in Kattowitz, which was moving down August-Schneiderstraße (today’s Mickiewicz-Street) towards the Market-Square, our soldiers were treacherously fired at from the synagogue. Heavily armed insurgents entrenched themselves in the synagogue and when the troops moved by, the Polish cowardly murderers opened fire.

The troops of course started defending themselves. Additionally small detachments of the order police and security police were sent to action and they opened fire, together with the military, at the insurgents. During the shoot-out the synagogue caught fire. With the exception of two insurgents, who were caught during their flight, the franktireurs were buried in the burning ruins of the synagogue.

The Polish insurgents were armed with machine guns and rifles.

Yesterday afternoon in the center of Kattowitz there was, as usual, quite vibrant activity.

The places of entertainment were full, and the streets were filled mostly with people who, after days of a Polish reign of terror, enjoyed the relaxed atmosphere.

Suddenly shrill sounds of horns could be heard from the direction of Wilhelmsplatz (today’s Freedom Square) and immediately after that  military cars rushed down Grundmannstraße (today’s 3rd-May-Street).

Everyone stood and watched the speeding vehicles. No one could have guessed that Polish militants had entrenched themselves in the middle of the city.

Shortly afterwards rifle-gunfire crackled and machine-guns rattled. Between them dull sounds like detonation of hand grenades. At the same time commands were shouted “from the street!”, “to the homes!”. Within merely 30 seconds Grundmannstraße, which had just been filled with people, became deserted. People crowded into the stores and staircases of houses.  Windows were covered in a hurry.

Nobody knew what was happening. Everybody heard shots fired but everyone gave a different direction.

In reality the shots were fired from the synagogue in August-Schneiderstraße (Mickiewicz-Street). Around eight o’clock a message arrives to our editorial office that the synagogue is burning. We are going to August-Schneiderstraße. Even from a distance the bright glow of the fire announces that the Jewish temple is on fire. The military separated the area with a wide circle. The flames are already reaching the roof. The interior of the building is brightly lit by the flames as if by daylight. Of the Polish thugs who entrenched themselves inside, nobody can  remain alive anymore.

The flames penetrate higher and higher.  With a thunderous roar the roof truss breaks . Tiles are continually falling to the ground. 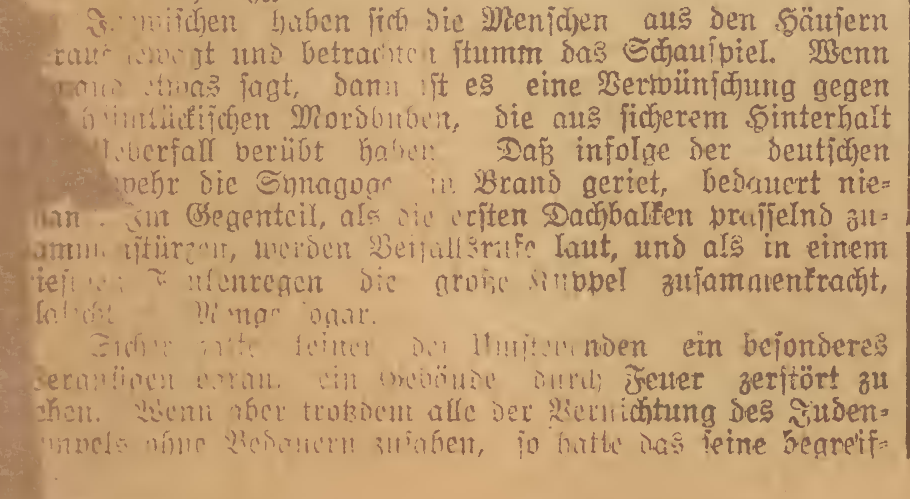 In the meantime, people have turned out from their homes and watched the whole spectacle speechless. And if anyone says anything, it is a curse at the treacherous murderers who carried out the ambush from a secure hideout. That, as a result of the German defense the synagogue caught fire, no one regrets. On the contrary, when the first beams of the roof collapsed with a crash, cries of pleasure resounded, and when in a huge shower of sparks the great dome collapsed, the crowd even applauded.

Certainly no circumstances provide any special pleasure to watch a building destroyed in a fire. If, however,  everyone watched the destruction of the Jewish Temple without regret, it had its understandable reasons.

Here something was turned into ashes which the Upper Silesian hates like a plague:
the Polish insurgents and their Jewish supporters! In case of any other fire the spectators would probably jump immediately to the rescue. Here, however, vile rabble met their deserved end, for whom no Upper Silesian  would lift his finger.  Evidence of this attitude of our population is the following incident: when the dome was already standing in bright flames, one heard suddenly, from the direction of Zalenze (suburb of Kattowitz), a sound of a bell and the rumble of horses’ hooves. Then a fire truck, pulled by two horses, turned to the square in front of the synagogue. The firefighters jumped off the truck and, straightened up,  saluted the surrounding soldiers with “Heil Hitler”.

This miserable fire truck, as these brave men explained, they rescued from pillage by the Polish hordes because they were unwilling to leave Zalenze completely without protection against arson.

When they saw the glow in the sky, although there were only a few of them and they did not have more useful horses, they went immediately to intervene and help. Now, however, as explained by the commander of the column with all tranquility of his soul, they no longer see the slightest reason to proceed with the action. The firefighters only climbed onto the roof  of the closest standing building to protect it from the fire spreading. The house was properly drenched with water and then firefighters from Zalenze stood among the other spectators.